Also see these associated resource pages that support our video, “TWITTER EXPOSED: Enabling the Taliban – but stopping a campaign to rescue US allies FROM the Taliban”: 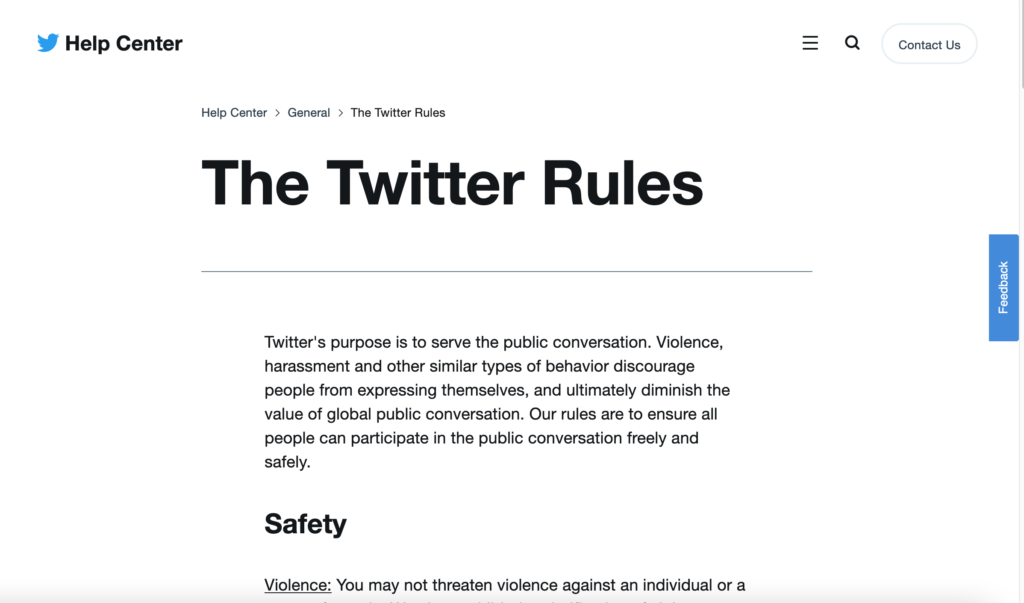 The following are relevant excerpts from Twitter’s general document governing user conduct, The Twitter Rules, which includes prohibitions of:

Update, September 3, 2022: Twitter states its mission is “to help enable free expression and dialogue,” and that “we only remove content if it’s harmful and breaks our rules.”

Do you know how to spot misinformation?

Twitter might add a label or prevent amplification of misleading Tweets, but to help enable free expression and dialogue, we only remove content if it’s harmful and breaks our rules.

The following are relevant excerpts from Twitter’s page, “Glorification of violence policy”:

“You may not threaten violence against an individual or a group of people. We also prohibit the glorification of violence.” […]

“We define glorification to include praising, celebrating, or condoning statements, such as “I’m glad this happened”, “This person is my hero”, “I wish more people did things like this”, or “I hope this inspires others to act”.

“Violations of this policy include, but are not limited to, glorifying, praising, condoning, or celebrating:

The following are relevant excerpts from Twitter’s “Violent Organizations Policy”:

“You may not threaten or promote terrorism or violent extremism. Violent extremist groups are those that meet all of the below criteria:

The next section documents the reality of how this policy is applied, on a very selective basis.

“Our mission is to provide a forum that enables people to be informed and to engage their leaders directly. We also have a responsibility to the people who use Twitter to better explain why we make the decisions we make, which we will do here.

And yet, when confronted with the fact that Twitter has been enabling the world’s largest, most lethal anti-US terrorist regime, Iran, CEO Jack Dorsey claimed in 2020 that Twitter must “respect the ‘right’ of terror leaders to speak and to publish what they need”:

“We believe it’s important for everyone to hear from global leaders, and we have policies around world leaders,” Dorsey said in 2020. “We want to make sure we are respecting their right to speak and to publish what they need.”

What Elon Musk buying Twitter could mean for Jewish users and antisemitism – The Times of Israel, April 27, 2022.

That quote by Dorsey was first reported in numerous outlets in October 2018, via his testimony before Congress. Via MediaIte:

That is the same Jack Dorsey who shut down the NY Post’s account for posting a link to a deeply-researched article on Hunter Biden’s abandoned laptop, and why its contents substantively challenge Joe Biden’s denials that he ever communicated with, or profited from, his son’s business contacts.

“Our mission at Twitter is to serve the public conversation. We encourage a space that is safe and healthy, and censorship is not a part of our mission or platform. We only suspend an account or ask you to remove content when there is a violation of our rules.”

“We don’t let public figures break our rules. We might, however, keep a Tweet that has violated our rules available behind a notice and limit engagement when we think it’s of public interest to do so. See a Tweet you believe violates our rules? Please report it to us.

From: Twitter declares access to its platform a ‘human right’ amid censorship of conservatives – Fox News, June 5, 2021:

We are deeply concerned by the blocking of Twitter in Nigeria. Access to the free and #OpenInternet is an essential human right in modern society.

We will work to restore access for all those in Nigeria who rely on Twitter to communicate and connect with the world. #KeepitOn