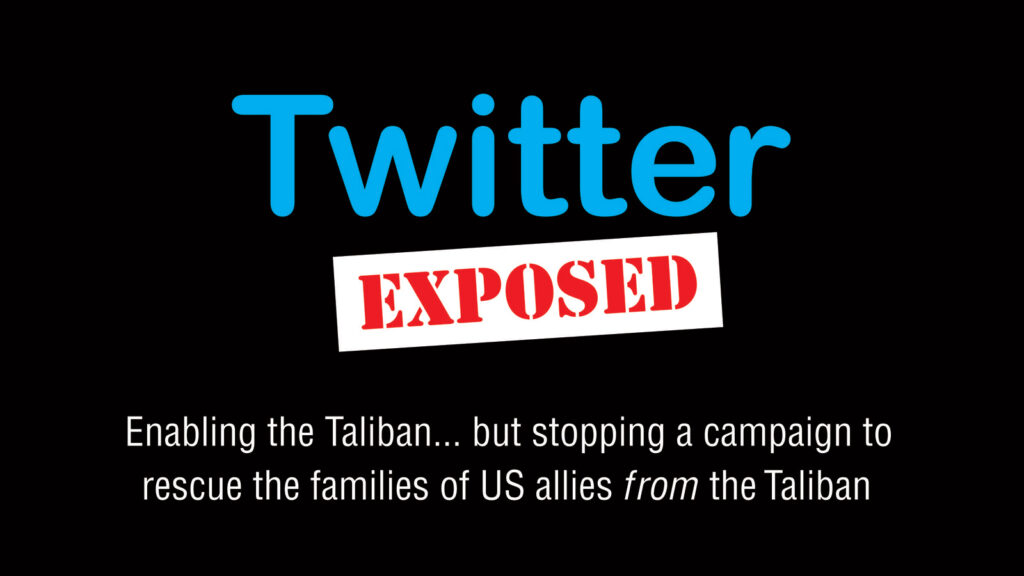 (2) Watch the video: “TWITTER EXPOSED: Enabling the Taliban… but stopping a campaign to rescue US allies from the Taliban”

(5) See the latest news about the “TWITTER EXPOSED” project

The purpose of the “TWITTER EXPOSED” campaign, developed for the Abramowitz Foundation by multimedia designer-writer-director Jon Sutz, is to raise public awareness of the following facts:

(1) Twitter sold the Abramowitz Foundation a promotional campaign to generate donations for our Afghan Ally Rescue Campaign, a nonprofit effort to help rescue US allies and their families who were left behind in Afghanistan, amid America’s disastrous withdrawal, and who are being hunted and killed by the Taliban, one of the world’s most brutal terrorist gangs.

(2) Twitter shut down our promotion for an unspecified violation of its policies, and refused our repeated requests that it (a) Inform us of the specific violation, and (b) How to get into compliance with its policies.

(3) Twitter did these things at the same time it was enabling the top members of the Taliban, which it has allowed to amass nearly 2 million followers.

(4) What Twitter did to us was not an exception to its rules. Rather, our documentation reveals, it is part of a continuing pattern by Twitter to shut down users over “violations” like “misgendering” someone, or exposing evidence of political corruption by members of the party to which Twitter employees direct 98.7% of their donations — while at the same time, enabling the unelected leader of the world’s most lethal state sponsor of anti-US terrorism, and a massively influential inciter of racist, anti-LGBT and anti-Semitic hate, to post at will.

Ideally, we hope that this awareness will trigger a desire among Americans of all political stripes to make tax-deductible donations to help us rescue these US allies and their families.

(2) Watch the video: “TWITTER EXPOSED: Enabling the Taliban… but stopping a campaign to rescue US allies from the Taliban”

The following page contains summaries of, and links to each of the topic-specific resource pages that support our allegations in the debut episode of TWITTER EXPOSED: “Enabling the Taliban – but stopping a campaign to rescue US allies FROM the Taliban”:

(5) See the latest news about the “TWITTER EXPOSED” project