The mission of the Abramowitz Foundation is to support pro-American, non-political, educational organizations in the U.S., Europe, and Israel.

The Foundation strives to educate the people and our government officials as to the threats we face, and offer common-sense solutions. We are fiercely loyal to the Constitution and Bill of Rights.

(3) About Kenneth and Nira Abramowitz 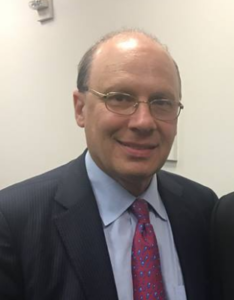 Kenneth Abramowitz is the founder and chairman of the Abramowitz Foundation.

Professionally, Kenneth is the Managing General Partner and co-founder of NGN Capital, a $450 million worldwide healthcare venture capital fund.  He joined NGN from The Carlyle Group in New York City, where he was Managing Director from 2001-2003, focused on U.S. buyout opportunities in the healthcare industry.

Prior to Carlyle, Kenneth was a healthcare analyst for Sanford C. Bernstein & Co. from 1978-2001. He was awarded Institutional Investor magazine’s “Number 1 Analyst in Medical Devices and/or Services” for 15 consecutive years, and in 2009 was entered into the “Wall Street Analyst Hall of Fame,” with a rank of 15 out of 15,000 analysts. He also published several notable studies on healthcare service companies, major medical mergers, and cardiovascular device innovation.

For decades, Kenneth has also engaged in, and financially supported a variety of philanthropic activities, generally in regards to championing America, Israel and Western civilization – and particularly, to raise awareness of the threats facing all of them. He currently serves on the boards of directors of the following organizations:Citizens for National Security

Kenneth is active in 25 nonprofits that are aligned with his values, and has given hundreds of speeches per year, across America and in Israel, since 2005.

Kenneth is also the founder and publisher of SaveTheWest.com, a website that, as he describes it, “is dedicated to saving Western Civilization…from itself.”

Jon Sutz is a multimedia designer, writer and creative consultant, with deep experience in advertising, corporate communications, litigation media and investigative journalism (bio).  From 2014-2020, Jon was the consulting editor and videographer for Ken’s SaveTheWest website (which he also designed; see some of the original content that Jon created for the site here).

From 2019-2021, Jon worked independently to create ILoveIsrael.me, which presents evidence-based information about what makes Israel such a remarkable, inspiring nation. The Abramowitz Foundation is acting as a fiscal sponsor for this nonprofit-in-formation, until it receives its 501(c)3 designation from the IRS. Learn about the ILoveIsrael project via this mini-documetnary, and how to make a tax-deductible donation for it, here.

In early 2022, after working to help several refugees from Afghanistan (1, 2), Jon developed the concept for what would become the Afghan Ally Rescue Campaign (AARC), to help get US allies and their families, who were left behind amid America’s disastrous August 2021 withdrawal, to safety.

Of the nonprofits that Jon inquired to about sponsoring the AARC (meaning, to providing the funding to develop the campaign, and produce the 3-minute promotional video), the Abramowitz Foundation was the only one that agreed to do so. As an offshoot of this project, Jon also produced a documentary video that exposes the following facts:

(1) Twitter sold the Abramowitz Foundation a promotional campaign for AARC, to help rescue US allies and their families from the Taliban

(2) Twitter then shut the promotion down, claiming it is a “violation” of its policies