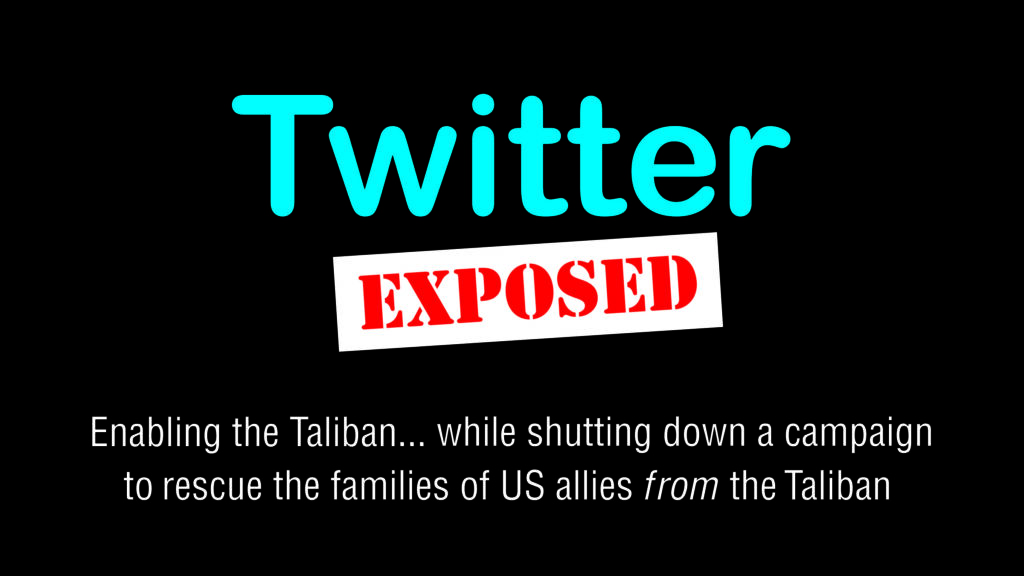 This page contains a chronological listing of all the links that are cited in the documentary, “TWITTER EXPOSED: Enabling the Taliban… while shutting down a campaign to rescue the families of US allies from the Taliban.”

For convenience, the content is broken by sections, with the time marks where they appear in the video, in parenthesis.

The Taliban reportedly have control of US biometric devices – a lesson in life-and-death consequences of data privacy – Yahoo News, August 30, 2021

Documentation: Background of Afghan Ally Rescue Campaign, and KNAF interaction with Twitter – This page contains all the screencaps cited, plus each email we exchanged with Twitter

The Taliban on Twitter – The complete resource directory, produced for the Kenneth & Nira Abramowitz Foundation

Excerpt: The top 5 Taliban officials who use Twitter, and their links to their pages

The Babylon Bee on Twitter – The complete resource directory, produced for the Kenneth & Nira Abramowitz Foundation

Note: Although the Babylon Bee’s account remains locked, as of September 5, 2022, the personal accounts of its two top leaders remain active:

“God don’t like men coming to men with lust in their hearts like you should go to a female. … If you think that the kingdom of God is going to be filled up with that kind of degenerate crap, you’re out of your damn mind.”

(1.3) Inciting hatred against the LGBT community

Those three racist murder sprees occurred within 20 months of Farrakhan publicly inciting such acts, in the summer of 2015

Twitter’s decision to continue enabling Farrakhan, in statements made long after the above

Twitter says no plans to ban Farrakhan after comparison of Jews to termites – The Times of Israel, October 18, 2018

“The Post’s primary Twitter account was locked as of 2:20 p.m. Wednesday because its articles about the messages obtained from Biden’s laptop broke the social network’s rules against “distribution of hacked material,” according to an email The Post received from Twitter.

“In line with our Hacked Materials Policy, as well as our approach to blocking URLs, we are taking action to block any links to or images of the material in question on Twitter,” a Twitter spokesperson told The Post in a statement.

BONUS: A Google search using the string “NY Post Hunter Biden laptop,” to enable you to see the latest reports on this issue

Why should & how can #Israel be eliminated? Ayatollah Khamenei’s answer to 9 key questions.#HandsOffAlAqsa pic.twitter.com/IVPOuNfMQH